It is certain that the monk Willibrord, who was educated in Northumbria (Northern England) and Ireland, brought any civilization? Did he made the crossing to the mainland, and dir he put steps at the turn of the 7th and 8th centuries in an area by the Romans earlier was described as “the land of forests, swamps and marshes with an indigenous population that was too fierce and barbaric to bring any civilization”? A.H. van Berkum comes in his essay “Willibrord and Heiloo” to the following conclusion: “All the archaeological and literary evidence on Willibrords contacts with Heiloo considering, we can say without hesitation that the origin of Heiloo’s church (the White Church) goes back to him, that is for him personally as archbishop of the Frisians, and his helpers, especially Boniface, who has been of service to him in the years 719-722.”

From young monk to missionary
Willibrord born in 658 in Northumbria, northern England, was descended from a noble Anglo-Saxon race. What is written about him, and that is very much, is based on a few from his handwritten comments on a calendar, the biography “Vita Willibrordi” (about 790) on the basis of a high educated man of Charlemagne, Alcuin of York, and the extensive work “Historia Ecclesiastica Gentis Anglorum (Ecclesiastical History of the people of the Angles) by Beda Venerable (the Venerable Bede) of about 730.

Calender on which Willibrord in 728 made some notes on the left side. From the first three lines you can read: “In nomine (…) clemens willibrordus Anno (…)” Translated: “In the name (of the Lord) Clemens Willibrordus in the year (…)”.

Where did Willibrord came ashore?
According to his biographer Alcuinus he landed at the mouth of the Rhine (Rhenus) and sailed from there to the castellum of Utrecht, called by the Romans “Trajectum”. However, it must be doubted whether this is correct. Around 690 Utrecht was probably in Frisian hands and Willibrord will certainly not ventured directly a confrontation with the Frisian tribes. Some works that describe the life of Willibrord point to Katwijk when landing, other say Gravelingen (Zeeland) and Antwerp. From there Willibrord visited a large area stretching from the Lauwerszee to Belgium and Luxembourg.

Willibrord is leaving Ireland with his companions. From: De heilige Willibrord, Lingolsheim, 1989

Unlike the missionary practice of the Irish-Scottish monks who did not use a system in evangelization, Willibrord organized his missionary pragmatic and thoughtful. He first sought the protection of Pepinidise steward Pepin of Herstal, who had conquered around 690 the then Frisian riverarea around Utrecht and Dorestad from the Frisian king Radboud. He also enlisted papal approval. After two difficult trips to Rome, he was dedicated Archbishop of the Frisians in 695 by Pope Sergius I, where an old Roman fortress in the city center of Utrecht became his seat. At his ordination Willibrord received from the Pope the firstname Clemens.

Through the support of Pepin of Herstal, Willibrord got from the Frankish nobility a large quantity of estates donated. He was the founder and builder of many churches and monasteries. Willibrord received in 698 the first half of a large estate of Irmina of Oeren, an abbess near Trier. Irmina was the mother of Plectrude, wife of Pepin of Herstal. When Pepin of Herstal donated him later the rest of the estate, Willibrord was then able to found the Abbey of Echternach. In this abbey he prepared his mission trips to Frisia, Thuringia and Denmark. After the death of Pepin of Herstal in 714 the Frankish Civil War started in the Frankish kingdom. This allowed Radboud the opportunity to win back its lost territories in Central Netherlands, including Utrecht. Only when Charles Martel had conquered definitively Utrecht from Radboud, Willibrord could settle permanently in Utrecht. In 719 Willibrord was visited by Bonifatius, who left after spending three years to christianize the Germanic countries.

Last years of his life
Willibrord made a note that was put in the margin of a calendar, concerning the main dates of his missionary work: his arrival in 690 in Francia, episcopal consecration in 695, ending with the phrase “in Dei nomine feliciter” (in the name of God happy ). Willibrord died in 739 at the age of 81 and was buried at his own request in Echternach. Today Willibrord’s tomb is in the crypt of the Basilica of the Abbey of Echternach.

Willibrord and Heiloo
There is no irrefutable proof that Willibrord carried out his evangelization work in Heiloo. When we want to demonstrate the likelihood of his stay, which must be determined on the basis of “circumstantial evidence”. If Willibrord through Velsen, visited Heiloo, this may not have been before about 720. The ‘Frisia Ulterior’, the northern part of the kingdom of the Frisians, was previously too dangerous to travel for a preacher sent by the Frankish rulers. Only after the death of Radboud in 719 that was possible.

Saint Willibrord at the eastside of the Willibrorduschurch in Heiloo

Because Willibrord in 727/728 retreated to his monastery at Echternach, he may have been in Heiloo between 719 and 728. No earlier than about 720 would have arisen his well and he would have built a simple wooden house of worship, a church. The miracle of the creation of the well described by many, including by Beets, seems difficult to reconcile with the reality. Heiloo had before the arrival of Willibrord almost certainly an existing well, perhaps there were more resources, of which the resident population utilized them. Perhaps a sacred well for the Germanic people, Willibrord focused thereon.

Not until 1350 John Beke (Beka) who connected the name Willibrord at the waterhole in ‘Heyligelo’. It is striking that the biography of St. Adelbert, which performed around 720 missionary work in Egmond, makes no mention of Willibrord’s presence in Heiloo. Halbertsma has shown with his excavations that there have been an older pit beneath the pit dating from the 16th century, consisting of stacked sod, dating back to the Carolingian period (ca. 750-900). In 1704 the ‘t Hylo-er Ryskaartje’ indicates that there is a (pilgrims) route which in addition to Our Lady in Distress also the Willibrordusput and the (Protestant) Church were designated.

In the writings of later times people are still mentioning the well, but it must be in the shadow of, in 1713, the again sprung well on the grounds of Our Lady in Distress. Only late in the 19th century, there has been one or more consignment parties held in honor of Willibrord. Colored drawings by mr. L. Rabbit 1905 give a pilgrimage route from the Sanctuary of Our Lady in Distress to the “Pulpit” in the Heiloo forest. The route can be read both in an M-shape (“M” of Mary) and W-shape (“W” of Willibrord). The veneration of Willibrord is usually in the shadow of the Maria devotion. His image is therefore in a quiet, dark corner of the pilgrimage.

At the White Church, of course, the Willibrorduswell belongs to it. This is, as seen on old prints, already a long time so. It is highly unlikely that Willibrord himself has been in Heiloo and founded the church and according to tradition, and made miraculously a well starting on his trek through the coastal area of Kennemerland and West Friesland. In any way, the well in front of the church is named after him.

From excavations is revealed that the well can not be applied before the tenth century. From the sixteenth century until well into the nineteenth century, this “Willibrorduswell was ‘a simple brick parapet, constructed in a seven corner just above the sandstone slabs of the well casing. The well was renovated in 1881 to a design by the famous architect P.J.H. Cuypers. In the period 1947-1951 it got its present form: the brick walls and putcollar, a pulley, a wooden cover against pollution and a roof made on the advice of the priests from the Egmondermeer abbey.

In 2010 a restoration took place without any change. 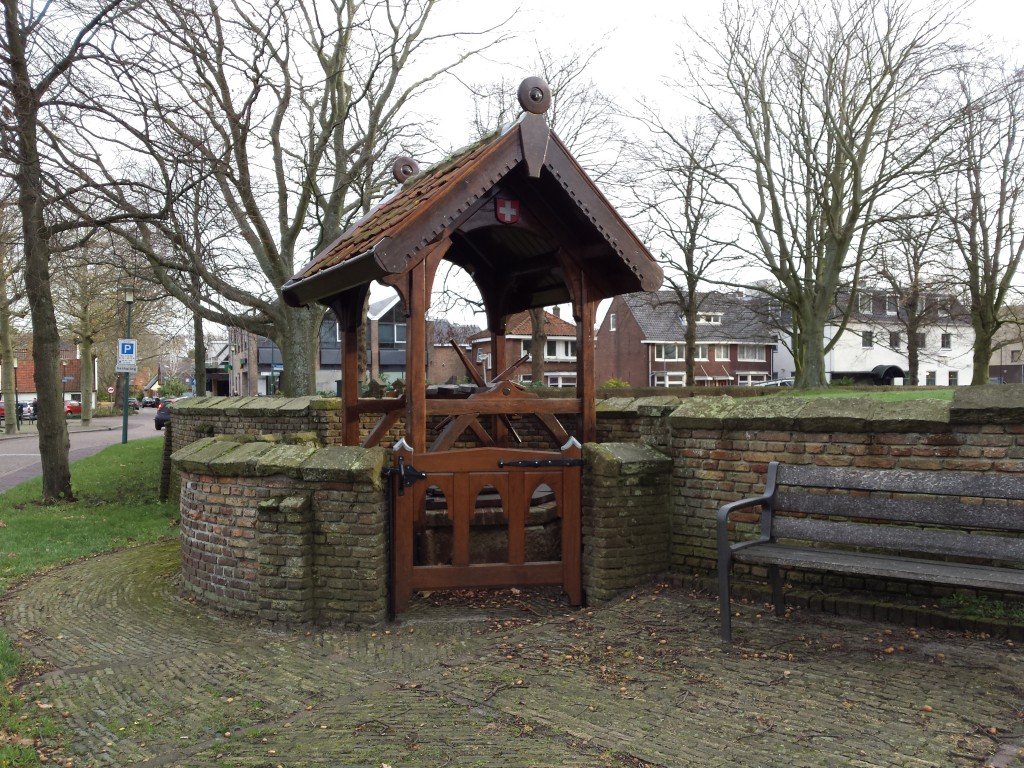 The Willibrordusstreet
At the corner of the Kuillaan and the Westerweg, opposite the house of the forrester, is an earthen wall on the side of the icerink. They called this increase “the pulpit”. According to another legend, Willibrord went by a path through the forest, later Willibrordusstreet, to preach for his new believers.