In 1836 the recently graduated Leiden pastor J.P. Hasebroek professions in Heiloo. He would stay there for seven years before continuing his edifying work elsewhere.

The rectory of Hasebroek was a meeting point for literary talent. The Leiden writer Johannes Kneppelhout, who published the successful ‘Studententypen’ under the pseudonym Klikspaan in 1841, was a regular guest, as was Jacob van Lennep, A.L.G. ‘Sweater’ Toussaint and Bernhard Gewin.

Other visitors to be mentioned were: “De Gids” editor Bakhuizen van den Brink, the teachers W. Brill and Laurens Beijnen, Cees van Foreest, friend and brother-in-law of Beets, the Haarlem publisher Pieter François Bohn, who edited much of the ‘Heiloose kring’, and a few other literati such as Jacob van Lennep and Willem de Clercq. In 1840 Hasebroek published the collection ‘Waarheid en droomen’ under the pseudonym Jonathan, with which he acquired national fame. In 1837 Hasebroek was asked by the Amsterdam literator E.J. Potgieter to become an employee of the magazine ‘De Gids’, which he co-founded. 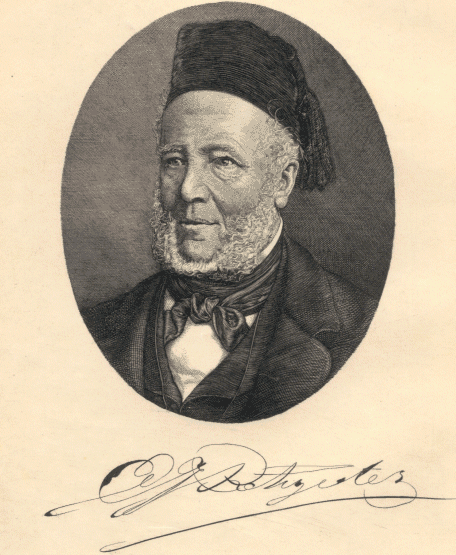 A close friendship grew between the two. After Potgieter’s visit to Heiloo, Hasebroek wrote: ‘The 24th of August 1837 is printed in gold letters in the book of my life. It was then that the light of your countenance shone across my path for the first time.’ Nicolaas Beets, who published the Camera obscura in 1839 under the pseudonym Hildebrand, was regularly to be found in Heiloo. No wonder, because he was engaged to Aleide van Foreest, the daughter of a well-to-do family who lived in the Nijenburgh country house.

When Potgieter came to visit Heiloo, both literati got into a fight. Potgieter thought Beets was arrogant, Beets thought Potgieter was too serious and stiff. In ‘Gij moet hierkomen!’ (Thou must come here!) (Reservaat, Heiloo/Eindhoven; fl. 32.50) Nico Keuning has bundled letters from Hasebroek, Beets and Guide editor R.C. Bakhuizen van den Brink from that period. Keuning borrowed the title, who presented the Heilooër literary travel guide ‘Rozenwolken en wierookwolken’ (Rose Clouds and Incense Clouds) in 1996, from a letter from Hasebroek to Potgieter from July 1837: ‘Thou must undeniably come and stay at the Pastory for a few days. You must come here, Potgieter, absolutely come here, if only from Friday to Sunday.

That visit came in August, but after that Potgieter didn’t exactly came often, even though Hasebroek begged him to come to Heiloo in the winter ‘on the wings of iron and friendship’. Potgieter, as a city dweller, turned his nose up a bit at the village atmosphere of Heiloo, which led to a strong outburst from Hasebroek in March 1838: ‘Conceited city dweller! To dare to ask us: what good is it to you to sit outside in this weather? Watch out! sweetly the sun shines on the steaming field! listen up! already some birds are humming their spring song. The storks are already making their nests on the church tower. Feeling! A gentle spring wind, whose sharpness is tempered by the influence of the rising sun, blows you caressing. (. . .) And you, in your barren, cellar-like, gloomy stone Amsterdam, you dare to ask: What’s the use of sitting outside?’

The contacts with Willem de Clercq from 1841 heralded the demise of “The circle of Heiloo”. Hasebroek and Betsy were both deeply influenced by the foreman of the Réveil. From 1841 we see Hasebroek increasingly turning away from the literary business. Contacts with literati who were not preachers became scarcer and scarcer, a clear symptom of a change in interest.

The departure to Breda in 1843 marked the definitive end of “De kring van Heiloo”, an end that was already apparent in the years before.