The history of Heiloo

Heiloo is located on an old beach wall. Parallel to the coast are beach walls created by ebb and flow movements. The coastline developed from east to west. Three beach walls were created. 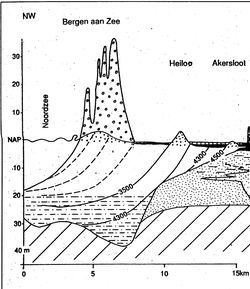 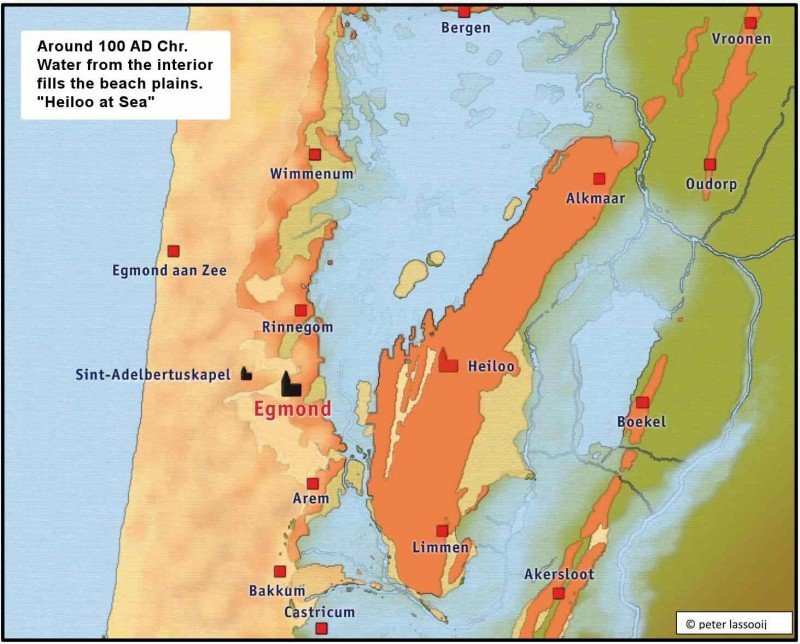 Peat areas arose between the beach walls, which were later filled with water by sea breakthroughs (Boekelermeer, Alkmaardermeer, Egmondermeer, Bergermeer). In the late Middle Ages, mainly through the efforts of the Egmonder Abbey, the sea breakthroughs were contained by dike construction. The original peat areas were filled with sand that was blown off the beach walls. This is how “geest grounds” were created (hence the name “Uitgeest”).

The beach walls were a – relatively – safe place to protect residents from the erratic sea. The discovery of “the wood of Heiloo”, a plank that was used to make fire, could indicate that habitation was already present in the (prehistoric) Middle Stone Age (ca. 8000 BC). So for the creation of the beach walls. On higher parts in what is now Noord-Holland, such as Texel and Wieringen, finds have been made from the New Stone Age, such as a tree canoe from about 3300 BC.

The “Wood of Heiloo’

In the years 2000-800 BC, the Bronze Age, it is believed that hunters, fishermen and later farmers lived on the beach walls. Excavations at the Maalwater in 2005 found traces of what most likely was a ‘woodhenge’, a ritual pile circle from prehistoric times. It is most likely a ritual site, of which more have been found in England, hence the name “woodhenge”. 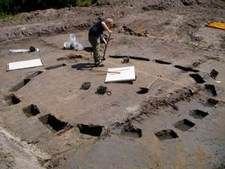 Findings of the soil of the Wood Circle

Archaeological research in Heiloo and some finds by lay people at the beginning of the twentieth century underline that the shoreline on which Heiloo lies was inhabited from the Bronze Age (2000 – 700 BC). This is indicated by the so-called “sickles” of flint and bronze (from about 1000 BC) found around 1930, which served as agricultural tools. These five shekels were found near the place where the wood circle was later discovered. They were grouped in such a way that it also indicates a ritual. 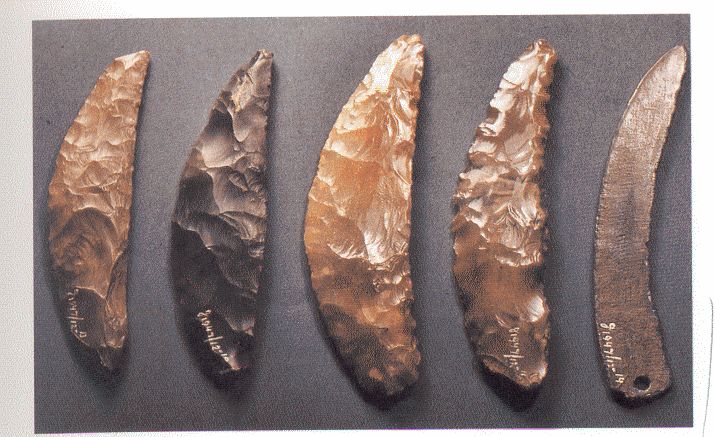 A few things are known about the Roman era (around the beginning of the era and the first centuries AD). The Romans occupied our land around the era and founded, among other things, a fort located near the present Velsen. This explains the discovery in the bottom of Heiloo of pottery shards and coins of Roman origin. The weaving weights (rings of baked earthenware) found in 1921 also indicate habitation around 200 AD. 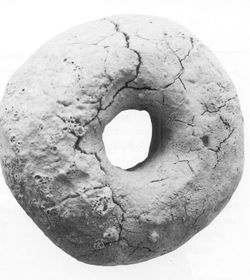 The Roman (cultural) influence in the north of our country was, partly due to the opposition of the Germanic population living there, the Frisians, not nearly as predominant as in the south. As Roman power drew to a close, a power vacuum was created. The result may have been that population movements started. There is a period after the Roman era (400 – 700 AD), the “Dark Middle Ages” about which little is known, also with regard to the occupation of Heiloo. It is assumed that the northern part of Heiloo was not or hardly inhabited and the southern part, Oesdom, did have habitation. This is supported by some archaeological finds. The northern part, around the place where the White Church now stands, may have been a holy place, an old Germanic sanctuary. Shrines were always established some distance from a settlement. Hence perhaps the name Heilichloo, or Heilighelo or Heyloo. The name probably means “sacred height”. The obvious translation “sacred grove” is less likely. The beach walls had little afforestation in the Middle Ages. The preacher Willibrord chose c. 720 AD. – on purpose – the (pagan) holy place to build a church. 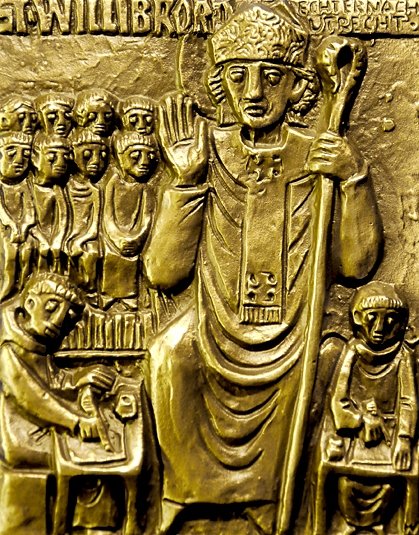 Origin of the village of Heiloo
The early village of Heiloo was created around the year 700 around a small church, the predecessor of the White Church. The hamlet of Oesdom, located much further south, built around the Chapel on the border with present Limmen, was a separate administrative unit until 1509. After that, Oesdom became part of Heiloo. Both Heiloo and Oesdom originated around a water source; each has its own legend.

Road pattern north-south
A north-south oriented road pattern developed on the elongated, relatively narrow beach wall. In the middle of the road structure, the Hoogeweg is located at the highest point of the beach wall; in built-up areas known under the name Heerenweg. In the west the beach wall is bordered by the Westerweg, and in the east by the Oosterzijweg. The Kennemerstraatweg only became important when in the first half of the 19th century as an important connecting road between Alkmaar and Haarlem, it was the first road in Heiloo to be “paved” through the empire with bricks.

The name Heiloo
Heiloo (from: Heilig loo = holy height). The word “loo” is associated with an elevated location, such as the location of the White Church. This is not, as once assumed, on a mound, but on a dune. Among other things, a woodpile circle has been found on the western beach plain of Heiloo. The age of the structure is dated to 800 BC using C14 dating. (Early Iron Age). In the immediate vicinity circular ditches, pits and cattle paths from the same period and younger have been excavated. From the era onwards, people lived in the former salt marsh area west of the Limmen-Heiloo-Alkmaar beach wall. Finds from the Roman era are known at the height of the Vennewatersweg, on the Zeeweg, in the Maalwater and further in the direction of Alkmaar. Various stories are known about Christianization. But here too there is a lack of written and archaeological sources. Many of the stories originated during the 17th century. Then there was a romanticization of the outdoors. Some still believe that the Heiloo forest is identical to the Baduhenna forest where the Frisians killed 1,300 Romans in the Battle of Baduhenna. For example, the Baduhenna forest was said to be doomed after Christianization for its pagan rituals. It must have been Willibrord who preached it around 690 and made it a place of pilgrimage. However, no archaeological finds are known to confirm this story. Moreover, the question is whether the area was forested at the time of the story. The current forest is much younger. The origin of the forest is largely due to the first planting of the Nijenburg estate. According to pollen analysis at various places on the beach wall, the area was already tree-poor in the Bronze Age.

Extraction of wet soils
The lower, wet soils to the west and east of Heiloo were reclaimed between the 10th and the 12th century. In the centuries that followed, noble families settled mainly on the transitions between the higher and the lower lands (Ter Coulster, Ypestein). These locations were determined by the view of possible enemy parties, but also because their fortified houses often had a moat, which was filled with water that flowed from the higher ground to the lower one. The fortified houses have been replaced from the 17th century by country estates, which use the difference in level between the beach ridge and the beach plain to provide their ponds with running water (for example Nijenburg).
Livestock farms also established themselves on the transitions from beach ridge to beach plain. Characteristic c